Classification problems refer to modeling and predicting qualitative responses, \(Y\), often denoted as classes or categories on observed predictors \(x\). Categories can refer to anything that is qualitative in nature, such as relationship status, gender, eye color, demographic information and more.

Classification techniques are generally known as classifiers, of which there are a variety of methods, including logistic regression, k-nearest neighbors, trees, boosting, and Linear and Quadratic Discriminant Analysis. For this exercise, we will focus on logistic regression as it is the most common and straightforward of the techniques mentioned earlier.

As one might expect, logistic regression makes ample use of the logistic function as it outputs values between 0 and 1 which we can use to model and predict responses. The log function is described as:

When dealing with multiple independent values, or x predictors, the function takes the form:

At this point, the coefficients \(\beta_0, \beta_1, \cdots, $\beta_2\) of the model are unknown, so we must estimate them in order to perform predictions. The estimation is done using maximum likelihood, due to its more general nature and statistical features.

To fit the model properly, we must make estimates for the coefficients that predictions are as close as possible to the originally observed value. Maximum likelihood in this case can be formalized:

With additional product terms added for each independent variable.

Using the original logistic function, the coefficient estimates gained from the maximum likelihood function are used with the observed data.

Consider a data set of 144 observations of household cats. The data contains the cats' gender, body weight and height. Can we model and accurately predict the gender of a cat based on previously observed values?

The data set ships with R and is named cats.csv. Instead of loading it directly into R with the load() function, I wanted to test a new package readr, which improves R's vanilla data import methods.

We start by loading some packages to help with the analysis, readr and caret

The first command loads the csv data using readr's read_csv function and stores it in the cats variable. we then attach the data and print a summary to give us a quick look at what the data shows. 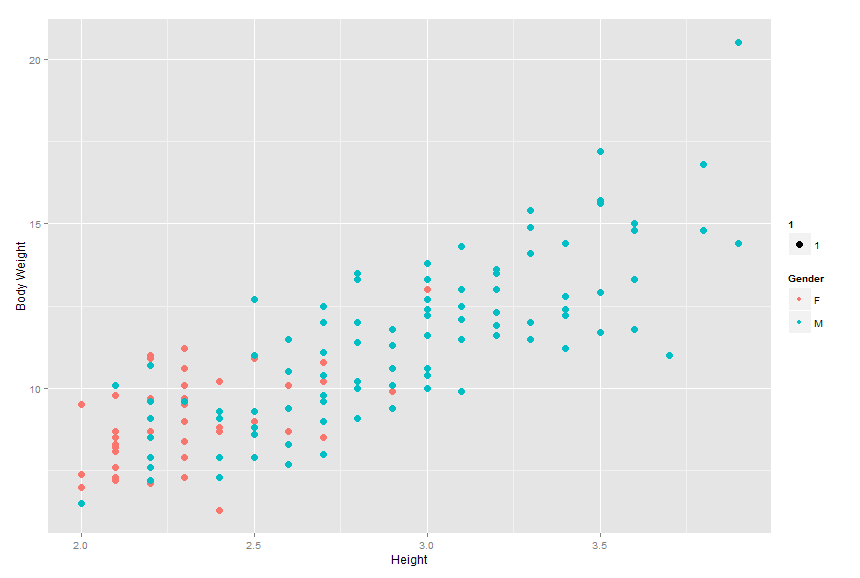 To perform logistic regression, we need to code the response variables into integers. This can be done using the factor() function. We create a new variable to store the coded categories for male and female cats in the data frame to call later. You can check how R factorizes the categories by calling the contrasts() function.

Looking at the output, we can see R has assigned 0 for female and 1 for male.

To verify and test our model's performance, we first need to split our data into training and test sets. This is where the caret package comes in, its createDataPartition() function is extremely useful for splitting data into separate sets. Here, we split 60% of the data for training using our new factorized variable and the remaining 40% for testing.

You can check how many observations are stored in the training and test sets by calling the dim() function, which outputs the dimensions of the desired set.

Calling this for the training and test sets contain four variables each with 88 and 56 observations, respectively.

With the training and test sets ready, we can fit our logistic regression model. This is done by calling the glm() function, which takes for its arguments the function string, the data, and a family argument. We use the coded response variable (cat gender) as the y with Bwt (Body Weight) and Hwt (Height) as independent predictors. The data to use is set to the training set, and family is set to binomial to tell R to perform logistic regression.

The second command prints a handy summary of the fitted model's statistics. The coefficients table tells us Body Weight is the most significant predictor in determining a cat's gender, evidenced by the variables comparatively high z-value and low p-value. This shows us we can reject the null hypothesis, noted as \(p(x) = \frac{e^{\beta_{0}}}{1 + e^{\beta_{0}}}\), that the probability of a cat's gender does not depend on body weight.

Height appears to be a far less significant in determining a cat's gender, shown by a relatively low z-value and a high p-value. This makes sense as anecdotally adult cats' heights don't vary much depending on gender.

We now have a fitted model of the data in which to do predictions! How does our model perform against testing data though? We can check by building a confusion matrix to display the success rate of our model's predictions on the testing data we created earlier.

The first command using the predict() function performs prediction on a cat's gender based on the body weight and height data of the testing set. The type is set to 'response' to output probabilities.

The next command creates a vector of the 'F' (female category, denoted as 0 in coded set) according to the number of observations in the training data set. This is then converted into 'M' where the predicted probability is greater than 50%.

We can also call the mean() function to find the success rate of our predictions. The rate is 67%, representing an error rate of about 33%, and is therefore much more accurate than random guessing.

Now that we know the model can predict more accurately than simply guessing, we can make predictions of cats' gender on new data. Again we call the predict() function but this time new data is entered for both Bwt and Hwt. These are set as (x, y) pairs; for example the first cat has a body weight of 2.8 and a height of 13.

Earlier we noted height was not a significant predictor of a cat's gender due to its high p-value and low z-value. Does the model results improve if we just use body weight as a predictor?

We fit a new model using the coded y data with just Bwt as a predictor. The data set and family remain the same.

The confusion matrix using the new model shows classifications are very similar to the original model. Also, the computed success rate of the prediction is the same.

Using the predict() function on the same body weights we previously predicted, we can see the probability of the cats being male is relatively similar compared to the previous model. Therefore, we can reasonably assume that although Height does not have as much predictive 'power' as Body Weight, it does not negatively impact the results and fitting of the model.