ANOVA, or Analysis of Variance, is a commonly used approach to testing a hypothesis when dealing with two or more groups. One-way ANOVA, which is what will be explored in this post, can be considered an extension of the t-test when more than two groups are being tested. The factor, or categorical variable, is often referred to as the 'treatment' in the ANOVA setting. ANOVA involves partitioning the data's total variation into variation between and within groups. This procedure is thus known as Analysis of Variance as sources of variation are examined separately.

The data is still assumed to be normally distributed with mean \(\mu_i\) and standard deviation \(\sigma_i^2\). Stating the hypothesis is also similar to previous examples when there were only two samples of interest. The hypothesis can be defined formally as:

\(H_A\) : Not all population means are equal

Consider an experiment designed to test plant yields from a control and two different treatments. The returns of each group are collected, and the dry weights of the plants are measured. Is there a difference in the means of the treatments?

There is no reason to assume there is a difference between the control and the two treatments so the hypothesis for this example can, therefore, be stated as:

\(H_A\) : At least one mean between the control and the two treatments is not equal.

First, start by loading the packages that will be needed to analyze the data as well as the dataset. The PlantGrowth dataset is available with base R.

A histogram and Q-Q plot can be plotted to check for normality in the data. 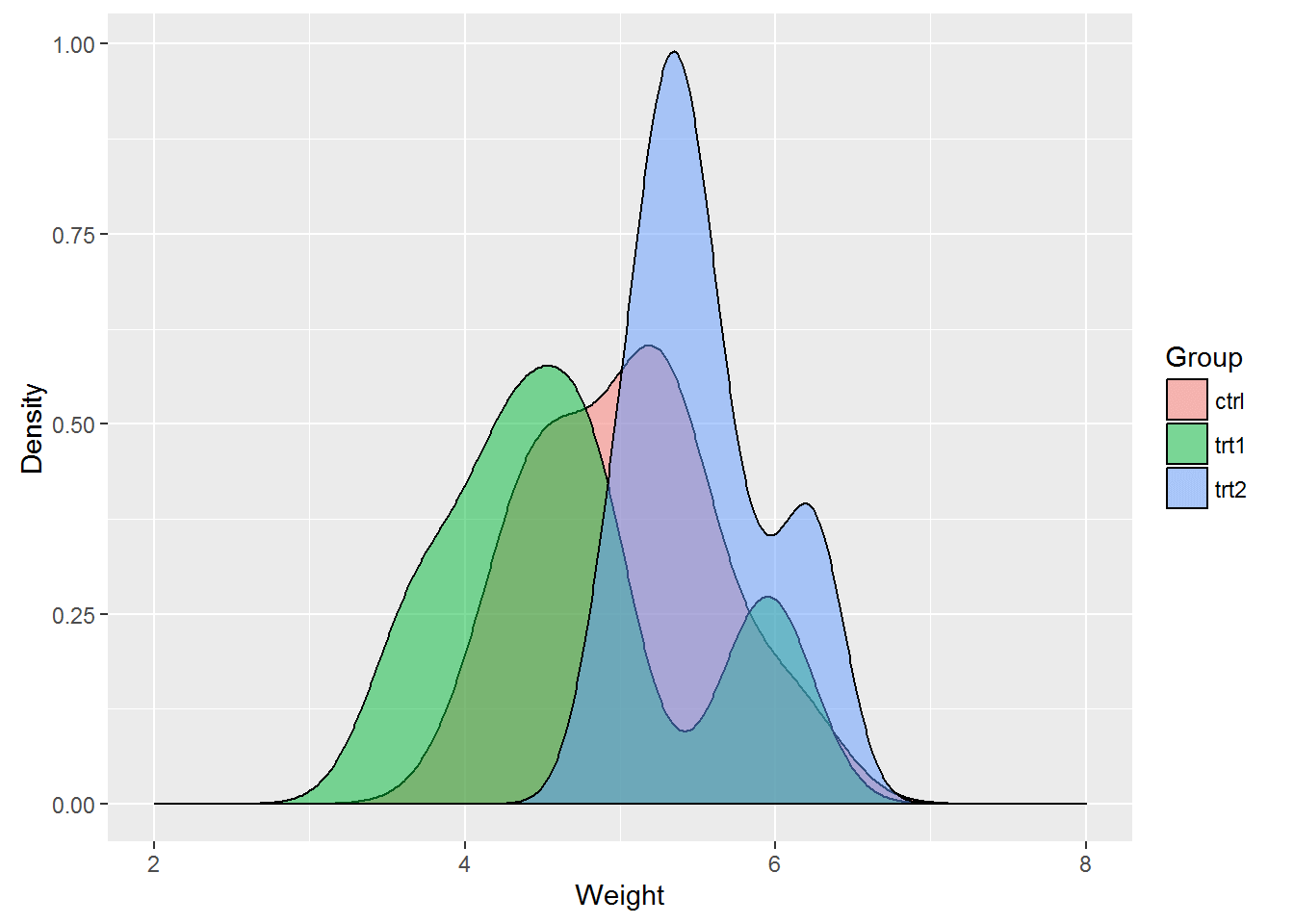 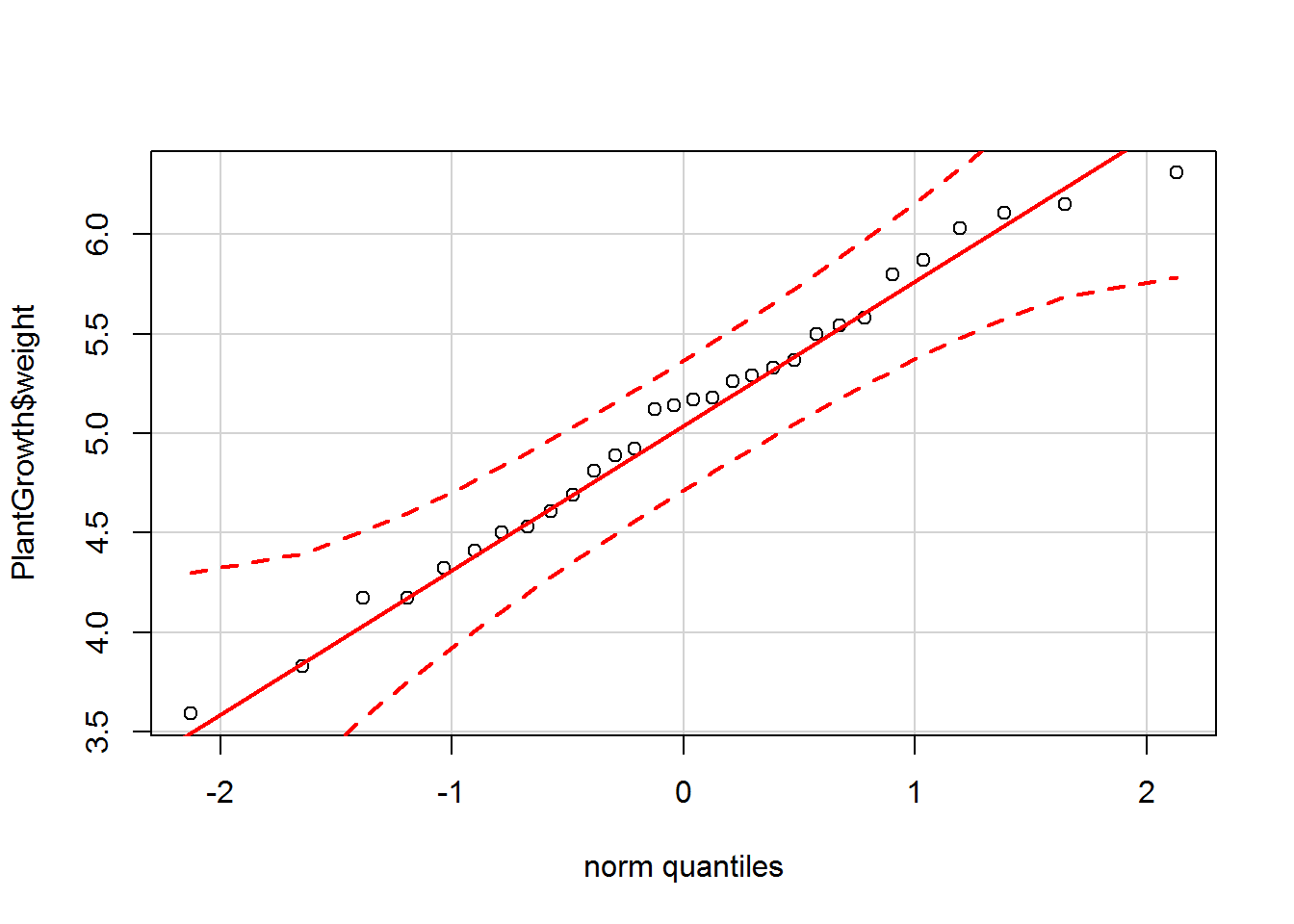 The histogram shows the data have an approximate bell shape and from first glance, it does appear there are differences in the treatments. The Q-Q plot provides further evidence of normality as most of the points fall on the line.

The p-value is far below 0.05, so the null is rejected, and it can be concluded there are differences between the treatment groups and the control.

The anova() call above produced a table that is often referred to as the ANOVA table. The table contains the degrees of freedom, the sum of squares, the mean square, F-statistic and the p-value. As mentioned earlier, the ANOVA splits the data's variation into two sources which are in turn used to calculate the F-statistic. The F-statistic is determined by the F-test, which is done by dividing the variance between groups by the variance within groups. The sum of squares for treatments is defined as \(SST\), for error as \(SSE\) and the total \(TotalSS\). The mean squares are calculated by dividing the sum of squares by the degrees of freedom.

Each sum of squares can be defined as:

The F-statistic is defined as:

To conduct the F-test to find the F-statistic, \(SST\) and \(SSE\) and the corresponding degrees of freedom need to be found. The approach taken here is to split the data by group and use lapply() and Reduce() to calculate \(SST\) and \(SSE\). I'm sure there are a multitude of better and more efficient approaches.

A similar table to the output of the anova() function is then made with the values computed above.

All the elements of the manually calculated ANOVA table match the output of the anova() function.

In this example, a hypothesis was tested with data from more than two treatments using One-way ANOVA. The reported ANOVA table from the anova() function was then replicated manually to verify the results. The test concluded there is a difference between the three treatments, however, nothing more than that is known. Which group is the most different from the others? How much do the two treatments defer from the control? Typically after performing a test involving more than two groups, post-hoc analysis is done to answer these questions.