The data we will cluster is seven different measures of air pollution of 41 cities throughout the United States (qtd. Rencher 502). The data were obtained from the companion FTP site of the book Methods of Multivariate Analysis and contains the variables as follows:

Although recommended by many authors, the question of scaling in the context of hierarchical clustering (particularly using the Euclidean distance measure) is not so black and white (Rencher 2002, pp. 454). The variables that best separate clusters might not do so after scaling. We will scale the pollution data because the variables' scale of measurement is quite different from each other, but it should be noted standardization should be thoughtfully applied (or not applied) rather than proceeding to scale automatically.

Measures of Similarity (or Dissimilarity) for Cluster Analysis

Before performing hierarchical clustering, we must find the similarity between each pair of observations, which is referred to as the distance. The distance measure is more of a measure of dissimilarity as it increases as the observations move farther away. As in agglomerative hierarchical clustering, there are many approaches to measuring the distance, the most common of which is the Euclidean distance. There is no 'best' distance measure, and one must consider the data at hand and the assumptions of each measure to select an appropriate method. Euclidean distance is the straight line between two pairs of observations and is defined as:

The following function implements the Euclidean distance calculations for each pair of observations in the dataset.

The dist() function in R also calculates the distance.

The output of the dist() function is an atomic vector. We convert it to a matrix here to compare our results with the function.

As the resulting matrices are \(41 \times 41\), check the first and bottom three rows of each to verify.

Although hierarchical clustering with a variety of different methods can be performed in R with the hclust() function, we can also replicate the routine to an extent to better understand how Johnson's algorithm is applied to hierarchical clustering and how hclust() works. To plot our clustering results, we will rely on one output of the hclust() function, the order value, which is purely used for plotting. To plot and compare our clustering results, the best method (that I know of) is to create an hclust object, which according to ?hclust, requires merge, height and the aforementioned order components.

Quoting from the hclust documentation of the required components:

merge is an n-1 by 2 matrix. Row i of merge describes the merging of clusters at step i of the clustering. If an element j in the row is negative, then observation -j was merged at this stage. If j is > positive then the merge was with the cluster formed at the (earlier) stage j of the algorithm. Thus negative entries in merge indicate agglomerations of singletons, and positive entries indicate agglomerations of non-singletons.

height is a set of n-1 real values (non-decreasing for ultrametric trees). The clustering height: that is, the value of the criterion associated with the clustering method for the particular agglomeration.

Order is a vector giving the permutation of the original observations suitable for plotting, in the sense > that a cluster plot using this ordering and matrix merge will not have crossings of the branches.

Therefore we need to build the merge and height objects. We will only use the order output of hclust() to plot.

To start, initialize the merge and height objects and set the diagonal of the distance matrix to Inf to avoid including 0s in our calculations.

The row and column names of the distance matrix are set to \(-1\) increasing up to \(-N\), which allows us to note if the merged cluster at a particular step was an individual cluster.

The following loop builds the merge and height objects needed for plotting the hierarchical clustering results. A visual example of how clustering is performed shows how the rows and columns are merged with a simple dataset.

Plotting the Hierarchical Clustering as a Dendrogram

We now have the merge and height components of an hclust object. The order component comes from the hclust() function. As noted, the order component is used just by hclust to plot and has no bearing on our understanding of cluster analysis.

According to the documentation in ?hclust, an hclust object is a list with class hclust of the above components. We construct the hclust class with the following: 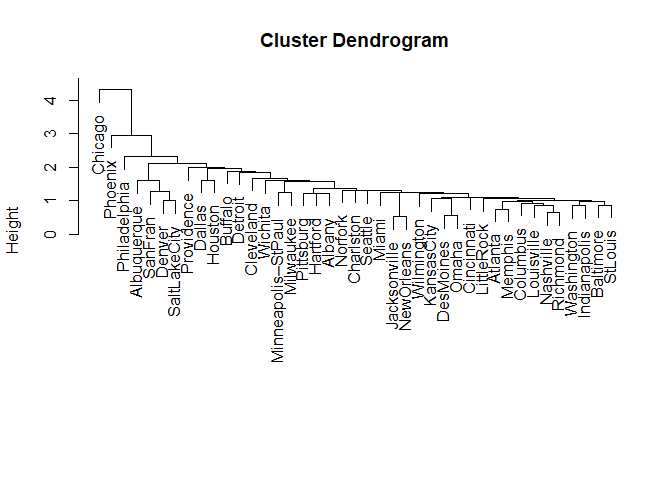 Plot the hierarchical clustering as given by the hclust() function to verify our results. 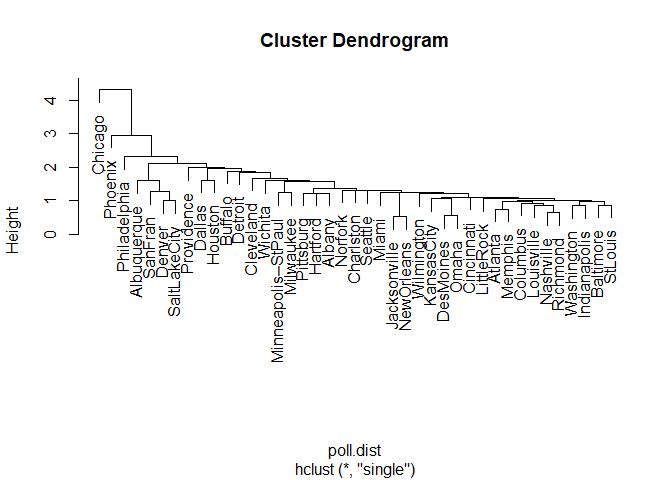 Interpretation of the Cluster Plot

Moving left to the right along the x-axis, we see there Chicago, Phoenix, and Philadelphia are separated from other cities to a decreasing degree. Otherwise, there isn't too much distinction between clusters. At the height of slightly more than two we have a three cluster solution (counting the number of lines crossed going left to right on the x-axis), but the third cluster would contain the bulk of the cities and thus isn't particularly useful. Using a lower height increases the number of clusters significantly, for example, a height of about 1.9 gives a six-cluster solution. However, the final cluster still contains a large amount of the cities and therefore isn't very descriptive of how the cities group themselves. This lack of separation in the clusters might indicate there isn't too much variation in the cities' pollution levels to begin with, the method of clustering used, or a combination of the two. The former point is further evidenced by small distances in the y-axis between many of the clusters.

We will see in later posts if using a different distance measure or clustering method improves the clustering of the cities. The hierarchical cluster could be 'cut' to the number of groups we are interested in, but since the clustering isn't that great, we will save this step once for when a better clustering and distance method are used.

Disadvantages of the Single Linkage Approach

The single linkage (nearest neighbors) approach has several disadvantages compared to other clustering methods and is therefore not recommended by many authors (Rencher, 2002, pp. 475). Single linkage is rather prone to chaining (also known as space-contracting), which is the tendency for newly formed clusters to move closer to individual observations, so observations end up joining other clusters rather than another individual observation. We can see this markedly in the hierarchical cluster plot above. The single linkage method is also sensitive to errors in distances between observations.

It should be noted there is no clear 'best' clustering method and often a good approach is to try several different methods. If the resulting clusters are somewhat similar, that is evidence there may be natural clusters in the data. Many studies, however, conclude Ward's method and the average linkage method are the overall best performers (Rencher, 2002, pp. 479).