Discriminant analysis assumes the two samples or populations being compared have the same covariance matrix \(\Sigma\) but distinct mean vectors \(\mu_1\) and \(\mu_2\) with \(p\) variables. The discriminant function that maximizes the separation of the groups is the linear combination of the \(p\) variables. The linear combination denoted \(z = a′y\) transforms the observation vectors to a scalar. The discriminant functions thus take the form:

Where \(W_1\) and \(W_2\) are defined as matrices of the sample sum of squares and cross products.

The maximum of the above function is found when \(a\) is equivalent or a multiple of the following:

Since \(a\) can be a multiple of the above, it is not unique; however, its direction is unique. By 'direction', it is implied the relative values of the vector \(a, $a_1, a_2, \cdots, a_p\) are unique.

The data we are interested in is four measurements of two different species of flea beetles. All measurements are in micrometers (\(\mu m\)) except for the elytra length which is in units of .01 mm. The data were obtained from the companion FTP site of the book Methods of Multivariate Analysis by Alvin Rencher.

Read the data and give the columns names for reference.

The dplyr package will be used for simple data manipulation.

Store the sample size and means of the two groups for later.

Which gives us the following discriminant function:

The interpretation of the discriminant function can be made in several ways. The most simple is to rank the absolute value of the coefficients and determine contribution based on the order of the coefficients. Another method is to perform a partial F-test to find the significance of the variables.

Judging from our discriminant function, it appears the first measurement is the most significant while the second and third measurements have similar contribution to group separation.

Note the discriminant function coefficients are different than what we computed earlier. This difference is due to another scaling method employed by the lda() function. Since any multiple of \(a\) can be taken as the maximum vector, either vector would suffice as the solution. We can see the coefficients are scaled differently than the \(a\) vector we found earlier. Despite this difference in scaling, output of the lda() function would still provide the same interpretation of the coefficients if they were ordered by their absolute values.

The group separation can be plotted by using the plot() function from the MASS package. Note since we are only concerned with one discriminant function the plot will be a histogram rather than a scatterplot. 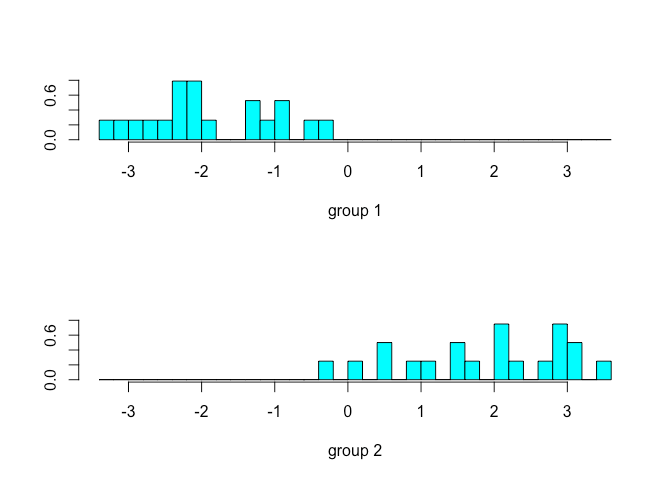 This post explored the objective of group separation using discriminant function analysis. By performing and interpreting a discriminant analysis function, one can get a better sense of what contributes the most distinction between the sample groups. As we will see in future posts, the discriminant function can also be used to classify and predict future observations.